I am sure that some of you have seen commercial before but its new to me. I love watching commercials and trying to figure out what they are advertising and seeing how they hope to get you hooked. This one made no sense to me. Jon Jones is an impressive athlete, but the clothes make him look like a normal guy. He’s shown side kicking his child on a swing, and there is a vague attempt at humor. If they didn’t put the text on the screen about the UFC being shown on FOX, I doubt any of us would have been able to guess that was the point of the ad. It looked like an advertisement for some family sitcom…that I wouldn’t watch. I don’t know if that’s the UFC’s attempt to grab a new demographic, soccer moms, or if FOX is trying to soften MMA’s image, but I don’t think its working…any of it.

END_OF_DOCUMENT_TOKEN_TO_BE_REPLACED

Therefore, when a martial artist makes a claim and backs it up, my otherwise cinical heart swells. For the life of me, I can’t figure out how this can be faked. The bb is fired too far away to the lady shooting it to be such a good shot that Isao Machii could already knows where exactly the bb will be. They are outside, not in a tv studio, and that makes it harder to see. And the fact that they are using a bb instead of a bullet makes you think that sane human beings are behind this stunt. Of course, I did see David Copperfield walk through the Great Wall of China on TV once too. But I digress, this was still wicked awesome.

As a martial artist, you have to be careful what you use your fame to endorse. Well, you might have to worry about this. I’m pretty sure I could endorse kool aid as a weight loss wonder drug and no one would take offense…or be aware of it. Never the less, even local martial arts instructors have to be careful of the what they promote to their students for two reasons, 1, they some times don’t realize you are joking. and 2, sometimes martial arts instructors give awful advice.

Anyway today is a list of martial arts stars endorsements that amuse and confuse us. After the break

END_OF_DOCUMENT_TOKEN_TO_BE_REPLACED Miyamoto Musashi, a samurai from the 1500s is credited with being the greatest swordsman of all time. His well known book on strategy “The Book of Five Rings” has been read by martial artists and supposedly (I don’t buy that dispite what I see at Barnes and Noble) businessmen, for years. A lesser known works was the Dokkodo, or the Path of Aloneness (which my spell checker claims is not a word) which he wrote at the same time, that odd end part of his life where he lived in a cave. There were twenty precepts, and I thought I would take a look at them

More after the break

END_OF_DOCUMENT_TOKEN_TO_BE_REPLACED

You may or may not have heard about Gina Carano starring in the upcoming movie Haywire. Gina Carano was the ranked third pound for pound when she retired from MMA, and suffered her only loss to Cristiane “Cyborg” Santos. So she is an exceptional fighter, and a lady fighter that still looks like a lady. There is some talk about trying to get her to return to MMA to fight Cyborg once she returns from her drug suspension. Honestly, I don’t know what she has to prove anymore, and if she can make some money making movies, that’s the course I would chose if I were her.

Anyway this brings me to my point, her voice isn’t being featured in her much hyped movie!

Yeah, for some reason they are voicing over her lines! When asked about she said

“Yeah absolutely and I’m surprised that hasn’t come up sooner. Stephen Soderberg wanted Mallory Kane [the character she plays in the movie] to be a completely different entity than Gina Carano. So he definitely went in and I went in to AVR and he did some tweaking. We all knew that that was going to come up because people know me so well in the MMA world. But he is quite a genius in what he has created and it still was an honor to be a part of it.

Even though it might not sound exactly like me, there are still parts of me that are in there. But he just wanted to make sure that that entity was completely different from myself…Yeah, everyone was a little curious about that. And I don’t blame anyone for being curious about it. But if I was bald and they had given me the voice of Bill Clinton I still would have done the movie”

Good for you Gina for puting the brave face on it, but it sounds like something else is going on. I don’t know if Gina can’t act or what, but somehow I doubt they just wanted to make her sound less like Gina Carano.

In South Korea, there is a Buddhist temple called Beomeosa ( which means “Temple of the Nirvana Fish” and no, I am not making this stuff up),which was built 1400 years ago. This temple is notable for teaching its monks a martial art called Sunmudo. These monks became famous when they helped defeat the invading Japanese army in the 1500’s under Shogun Hideyoshi. (That is to say the army was under the command of Hideyoshi, not the monks. Not really sure who commanded the monks. So stop interrupting ya goon!) They slipped out of history until Japan, being really stubborn about wanting to own Korea, invaded again in during World War II. The monks were all like, “Oh no you don’t!” and used their temple as a base for the underground resistance

Anyway its all about wide movements and jumping. The new master (last one recently died) decided that the martial art should be offered to the public, which is expressly against the wishes of the late master. When asked about this, the current master, monk Ando  “Absolutely, he would not be happy, he’d think my actions were too outlandish. I’d probably get the paddle.”

But that doesn’t stop him from building training centers in Korea and planning one to be built in Los Angeles. I guess that’s where he’d add “Cause I’m the master now!” but knowing these people, he’d probably just think it quietly to himself.

Cristiane “Cyborg” Santos, the worlds scariest woman tested positive for stanozolol metabolites following a Dec. 17 title defense at “Strikeforce: Melendez vs. Masvidal.” Naturally I was shocked…that no one had caught her before this. I mean really, she looks like a man. Or at the very least a woman on a high diet of testosterone. She’s so tough that when she married, she might have taken her husband’s last name, but she made him take her fight name (Evangelista “Cyborg” Santos) ! I’m not sure if the officials tested her medically or if they just looked at her after her last fight and exclaimed, “Enough is enough!”

Anyway, they’ve suspended her from fighting for one year and fined her $2500.  Most pro fighters at this level only fight twice a year anyway, so she really just got a “lose a turn” card, and she made $66,000 off this last fight, so the fine is less then the taxes she owes on the match. Not that much of a slap on the wrist. A better punishment is not to suspend her, or fine her, just make her have to take a weekly drug test for a year, see what that does to her fight career.

I am kind of sad that she didn’t get to fight Ronda Rousey (currently ranked #2 in the world). She’s an Olympic medalist in and fourth degree black belt in Judo and trains with Team Hayastan. I’m really excited to see the two of them fight. Not sure how four total pro matches can net you the #2 slot, but at least Ronda doesn’t look like some female steroid monster. She just wins with awesome judo.

Do you remember the article on Grand Master Frank Dux that I did a while ago? Well I ran across one of one of his comrades from the Black Dragon society…thingy, Soke Grand Master Irving Soto.

What I love is how his Uke (the guy he is doing moves to) keeps screaming and flailing after each move, yet on command, rises and seems fine and ready for the next beating from his instructor. Either he is hamming things up, or the master needs to take it easy on him. Apparently, I need to stop being so gentle with my students. So ah…study this and make sure you try it on someone this week. When you do, email me and let me know how that works out for you.

END_OF_DOCUMENT_TOKEN_TO_BE_REPLACED 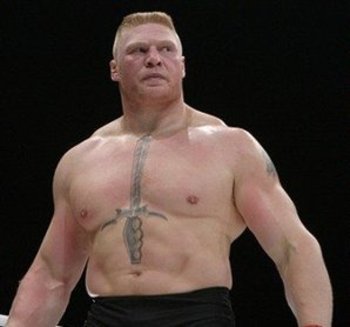 I am sure that all three of my readers have already watched UFC 141 or at least read about it already, so its really too late to try to tell you anything that you don’t know. Instead I thought I would talk about something you already have heard of, Brock Lesner retiring. First off, wow, this has been the year of well known fighters quiting. We’ve had Brock, BJ Penn, Matt Hughes, Matt Hamall, Mirko Cro Cop, and Randy Couture, just to name a few. I remember when Brock first came to the UFC, I thought to myself, “Yeah, lets see what a pro wrestler can do against real fighters!” Then he became Champion, and I wondered who we were going to get who could beat him. The man was just too powerful. Then we heard he was the highest paid fighter in all MMA competion. Then Cain Velasquez cracked his head open. Then the whole surgery thing. Then cam his loss last Friday. Talk about a flash in a pan. Brock came, stirred everything up and vanished, but in kind of a whinny BJ Penn kind of way. “If I can’t win easily, I don’t want to play.”

Fellows, if winning the UFC was easy, I’d have totally done it already. Now Brock gets to be remembered mostly for biggest hands and worst tatoo in UFC history! And he hasn’t even considered how hard it makes to cover things as a blogger! I could always fall back on something Chael Sonnen said, or I could make fun of Brock’s chest tatoo! I am totally unfriending him on Facebook.

I guess I could make fun of Nate Diaz…but that’s like making fun of the handycapped kid….just a really dangero